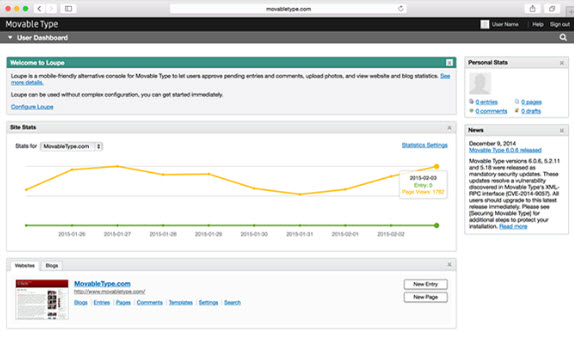 Movable Type is a web publishing system. It was developed in 2001 by the company Six Apart and is known to be proprietary software. There was an open source movable type project that ran from 2007 to 2013, incorporating a version of Movable Type available under GPL. Over the years the software has seen multiple upgrades. Initially it was released in 2001 with the next upgrade released just two years later. 3.0 was released in 2004 and came complete with dramatic changes in the licensing, mainly involving a stricter set of restrictions on its use by those using it without paying the licensing fee. Many criticized this move and switched to the then newly-developed WordPress. However, the release of version 3.2 saw a move back to the original format allowing unlimited weblogs at all licensing levels. Perhaps realizing that they couldn’t compete with WordPress under the more restrictive conditions, by Movable Type 3.3 the program had reverted back to a completely free state for those using the system for personal use only.  Download here.

The years have seen a number of different versions come and go. At this time the latest version appears to be that of Movable Type 6 released in 2013. It is now only available in professional and enterprise versions, and these are both closed versions. For those still wanting access to Open Source Movable Type, the older versions are still available.

Movable Type has a number of specific features. These include the ability to be able to host a number of different weblogs, separate content pages, files, templates, categories, tags and much more. It supports a static page generation, so that whenever a page is updated, the files will all be updated simultaneously. There is also a dynamic page generation option, which allows pages to be composited and hidden until the browser requests them to be used. The final option is a combination of both of the previously mentioned methods. The software also supports LDAP, allowing both user and group management of the system, and provides automatic blog options as well.

The entirety of Movable Type is written in Perl, which means that it offers strong support in the storage aspects of the weblog content through MySQL, PostgreSQl and SQLite. The last option is only available on version 5 but can be incorporated using a variety of plug-ins. The system also supports an Oracle Database and a Microsoft SQL Server as well.